Real-world data is indispensable when training object detection models for autonomous vehicle (AV) perception systems. Unfortunately, the real world doesn’t always easily provide all the data needed for successful training. For example, classes such as cyclists and motorcyclists may occur less frequently than pedestrians and cars, making it difficult for perception models trained on real-world data to correctly detect them (Figure 1). Similarly, the most dangerous situations such as accidents may be hidden in the last few percent of test drives. 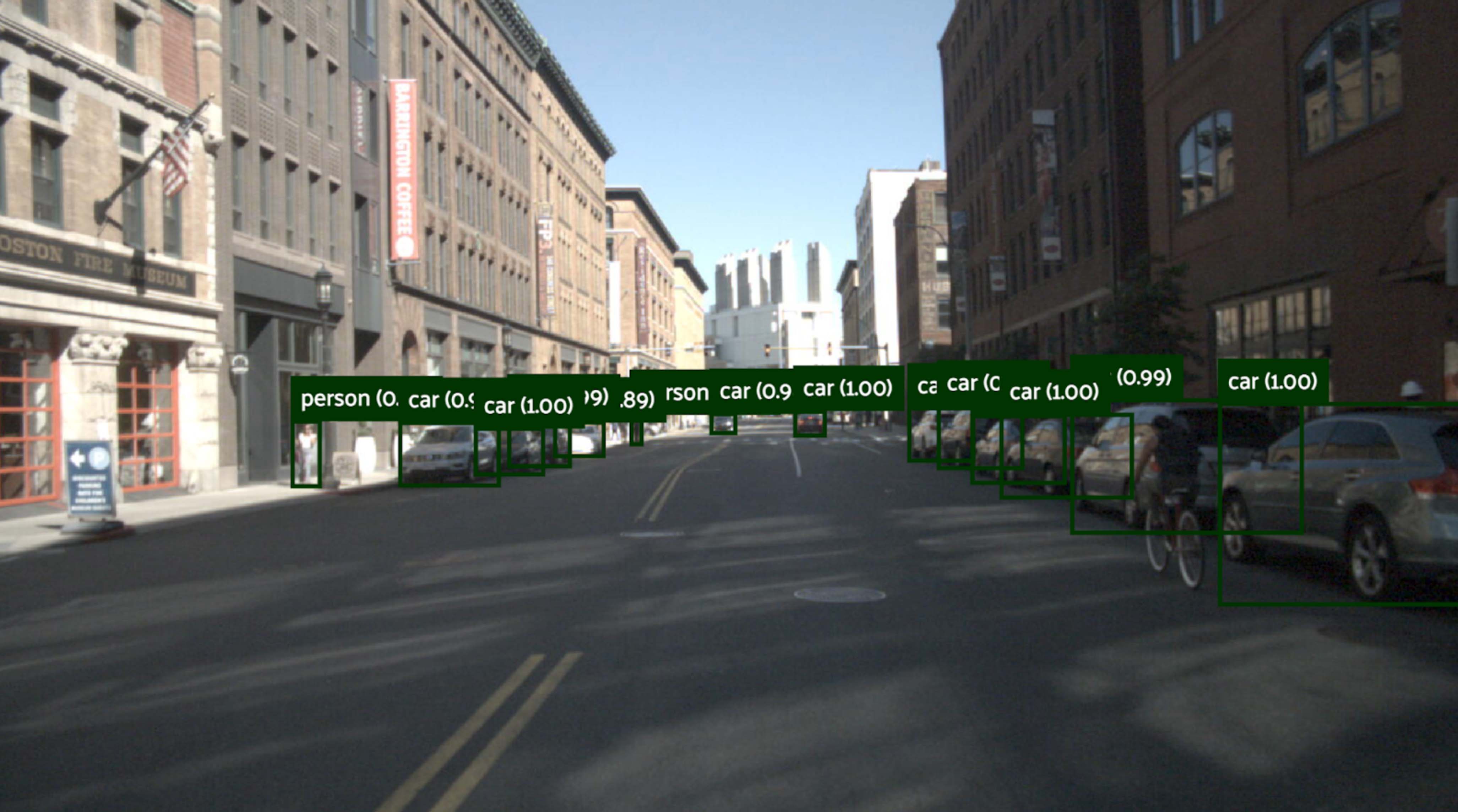 Figure 1: Cyclists are often underrepresented in real-world datasets. This makes it difficult for a perception model trained only on real-world data to detect cyclists.
Even though underrepresented classes and long-tail events occur less frequently in the real world, object detection models still need to be trained to handle them just as well as more common classes and situations. In the past few years, perception teams have started to utilize synthetic data to help address some of these limitations in real-world datasets. There still exists a domain gap between real-world and synthetic data, which is important to acknowledge, but recent methods are overcoming this gap with a combination of improved synthetic data and new machine learning training strategies.

To demonstrate this use case, Applied Intuition’s perception team has conducted a case study that uses synthetic data generated by Spectral as a supplemental training resource to address a class imbalance found in a real-world dataset. The study shows that synthetic data may be used to help mitigate class imbalances and address areas where real-world data is limited. 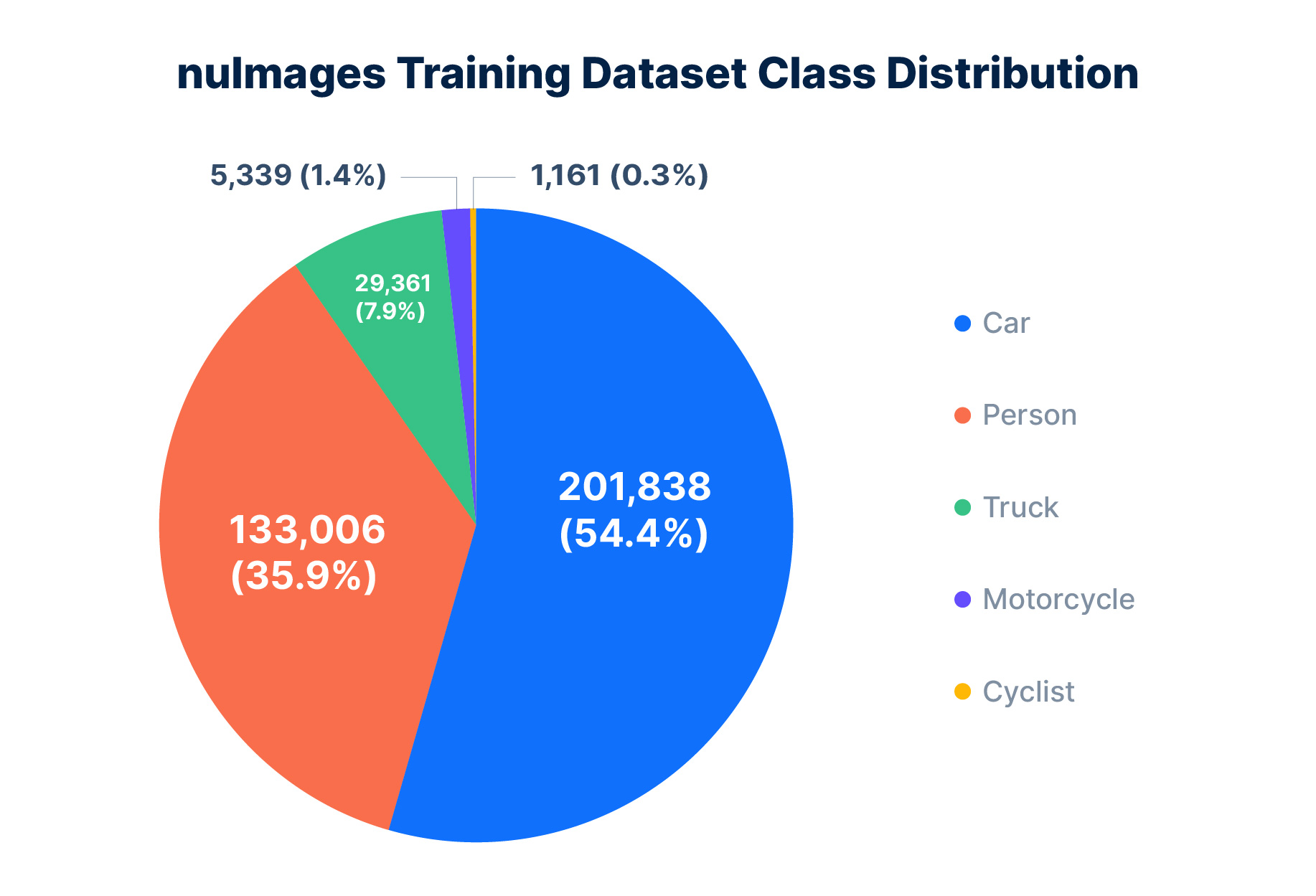 The study consists of the following steps:

First, it is measured how a perception model reacts to a class imbalance in the real-world nuImages data. A Cascade Mask R-CNN perception model is trained on this dataset until convergence. Its resulting object detection performance is lower on the cyclist class compared to all other classes (Figure 3).

Figure 3: The object detection performance of the baseline perception algorithm when trained on the nuImages data. Aggregate performance (bounding box, segment) and per-class performance (car, truck, cyclist, motorcycle, person) is measured in mean average precision (mAP) scores (i.e., the measure of the accuracy of object detection) and reported as averages over 0:5:0.95 Intersection-over-Union (IoU) values (i.e., the measure of how much the predicted boundary overlaps with the ground truth). 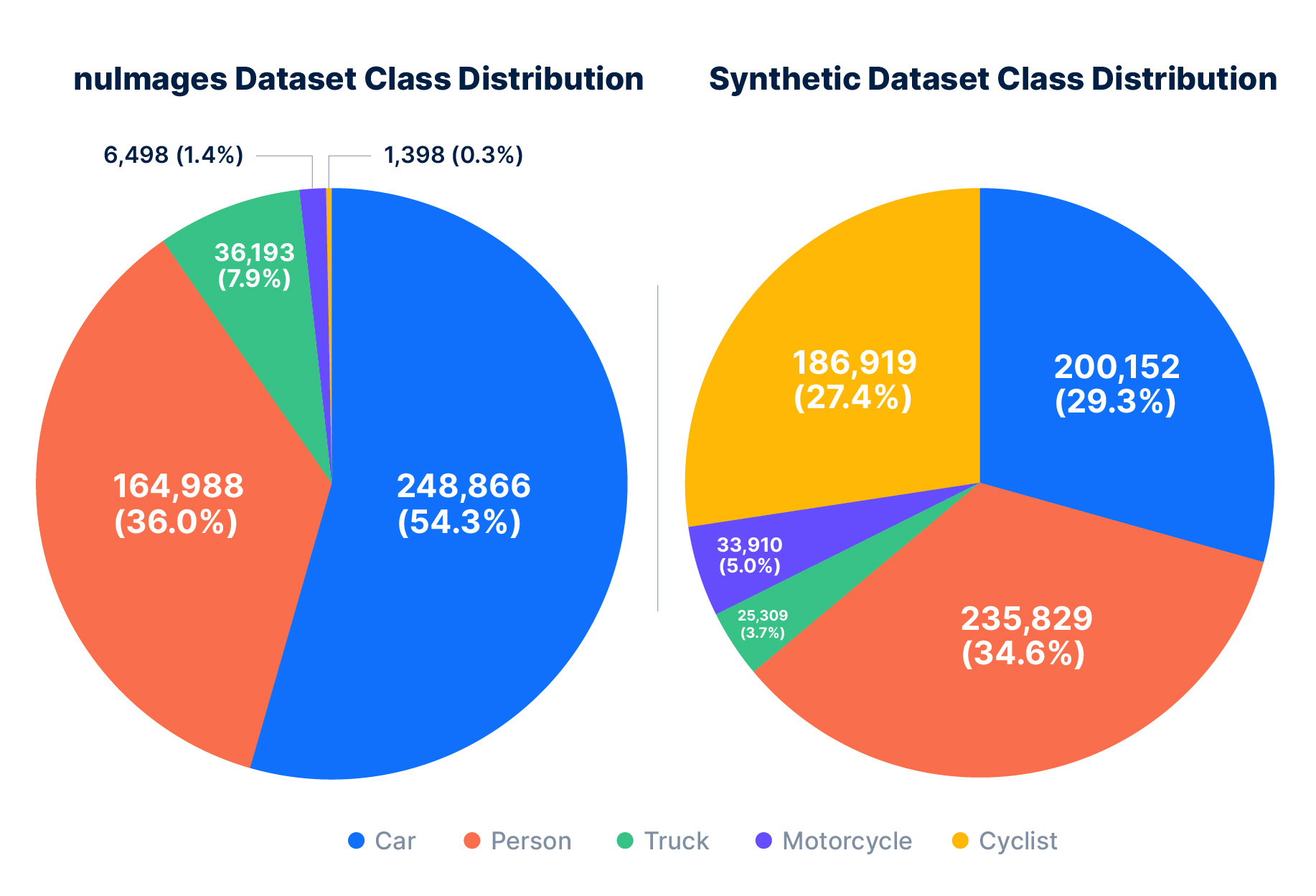 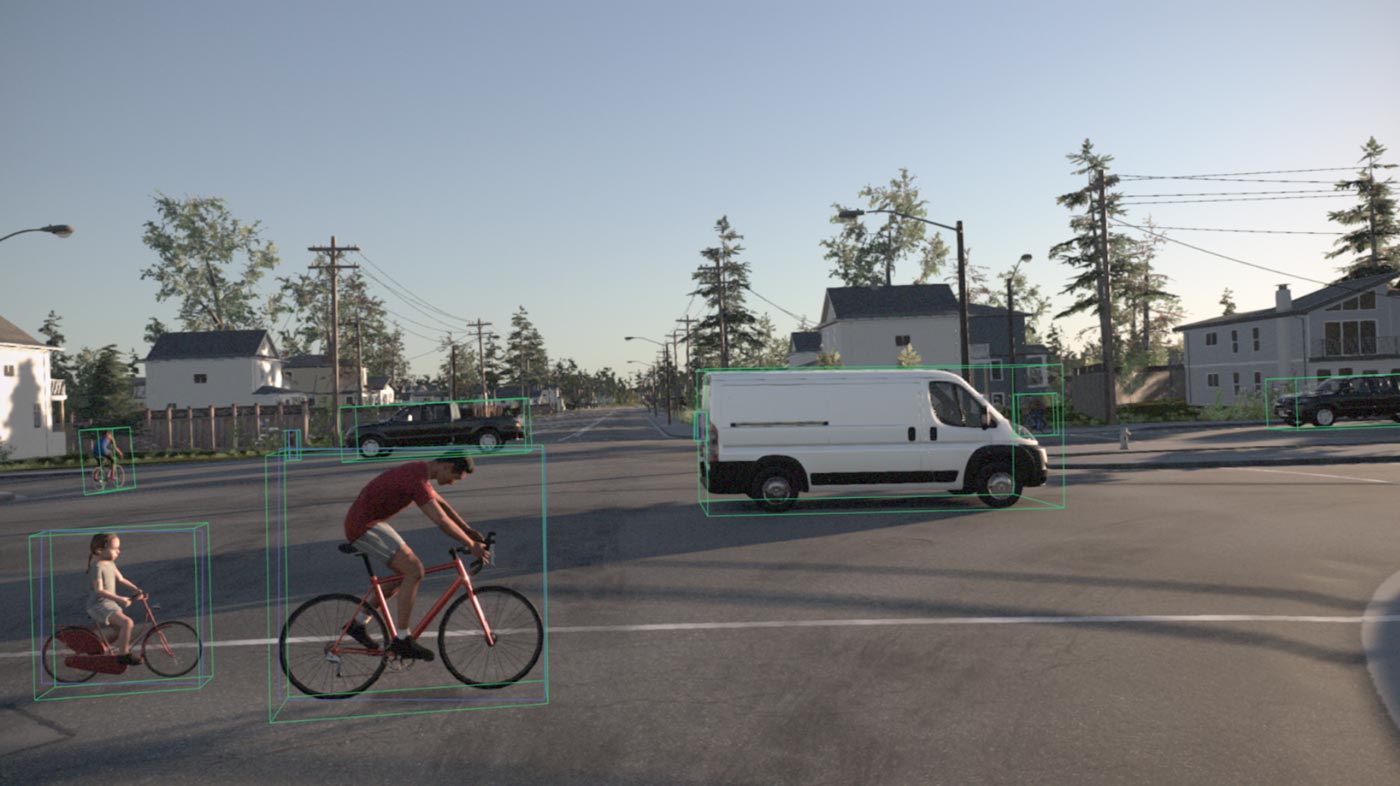 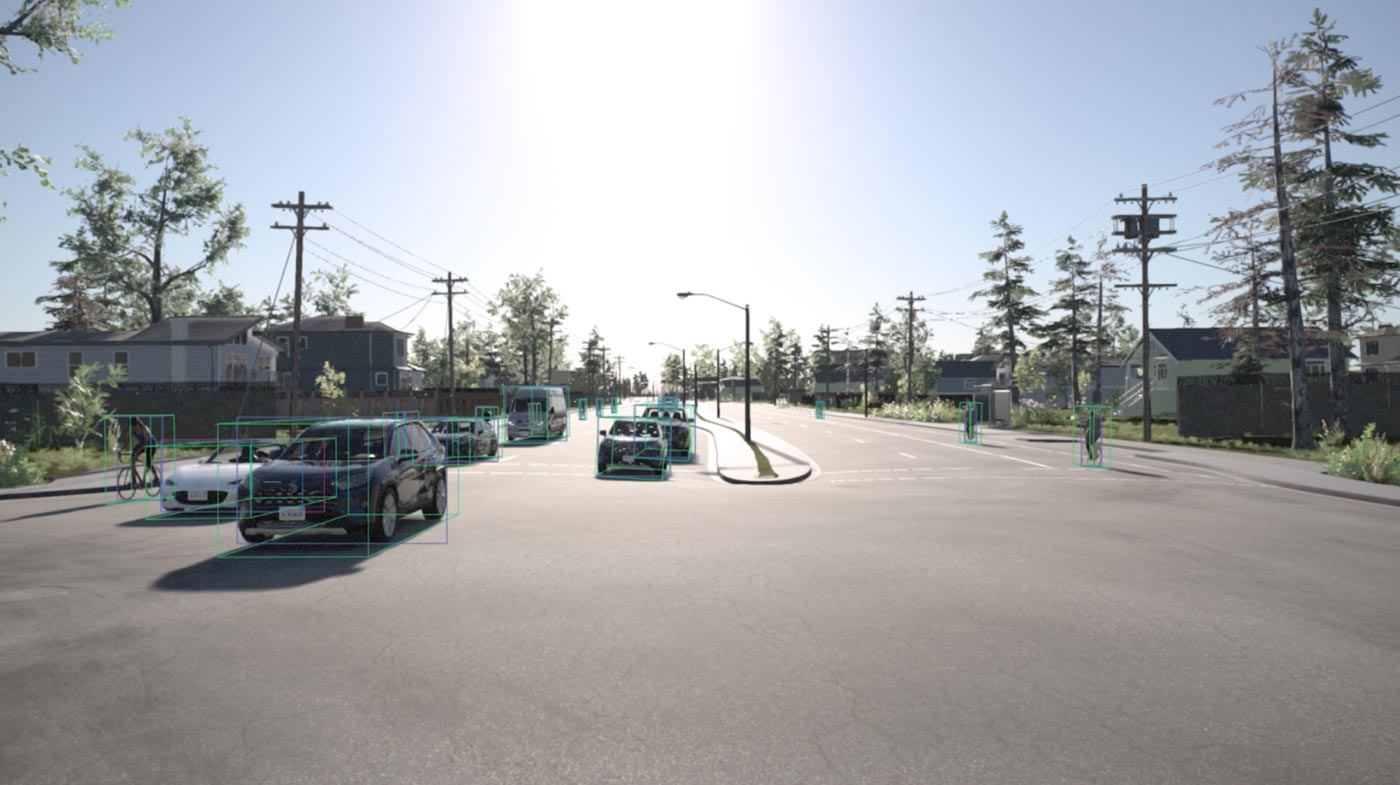 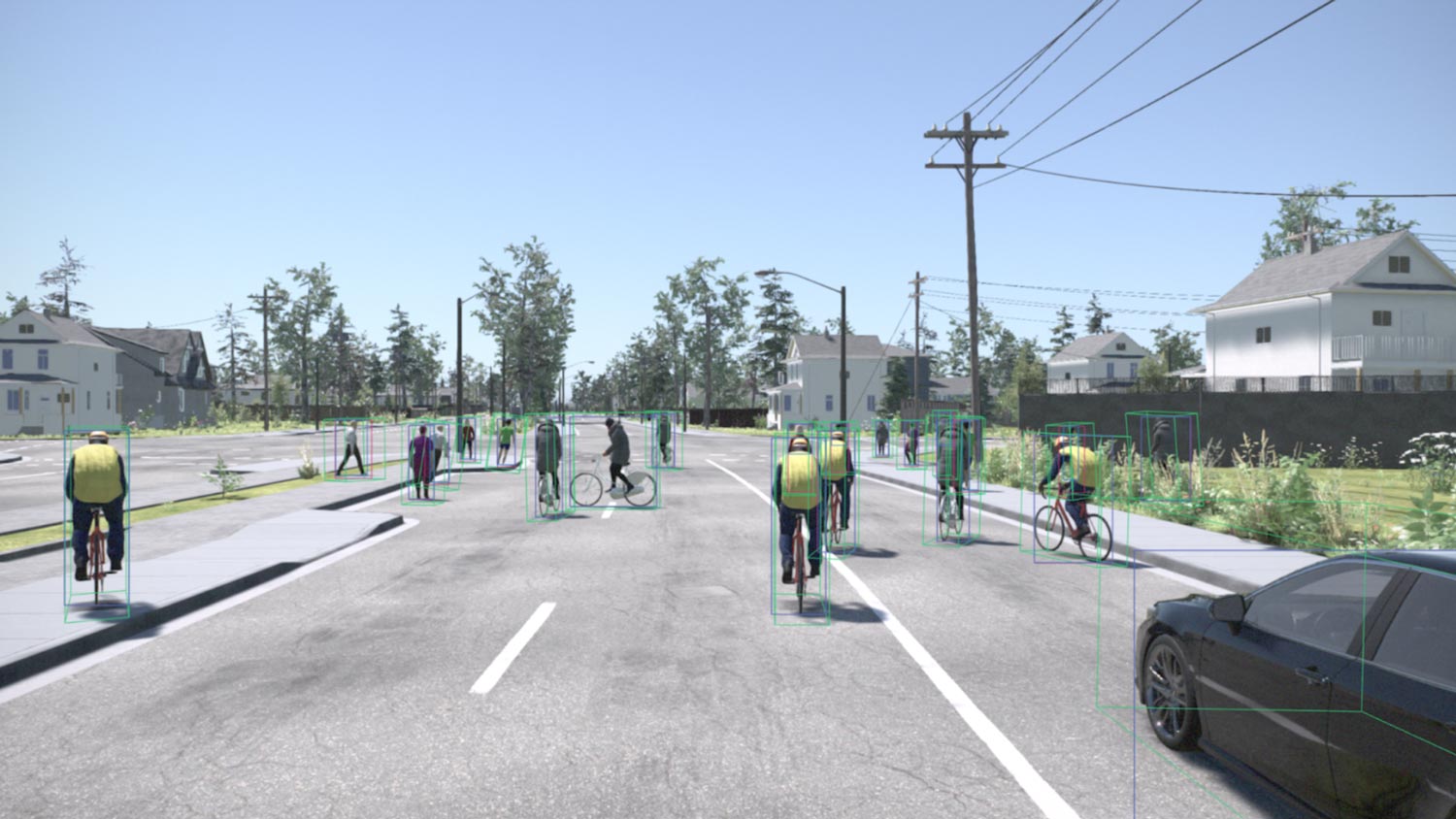 The above synthetic dataset is then used to improve model performance in the following experiments. 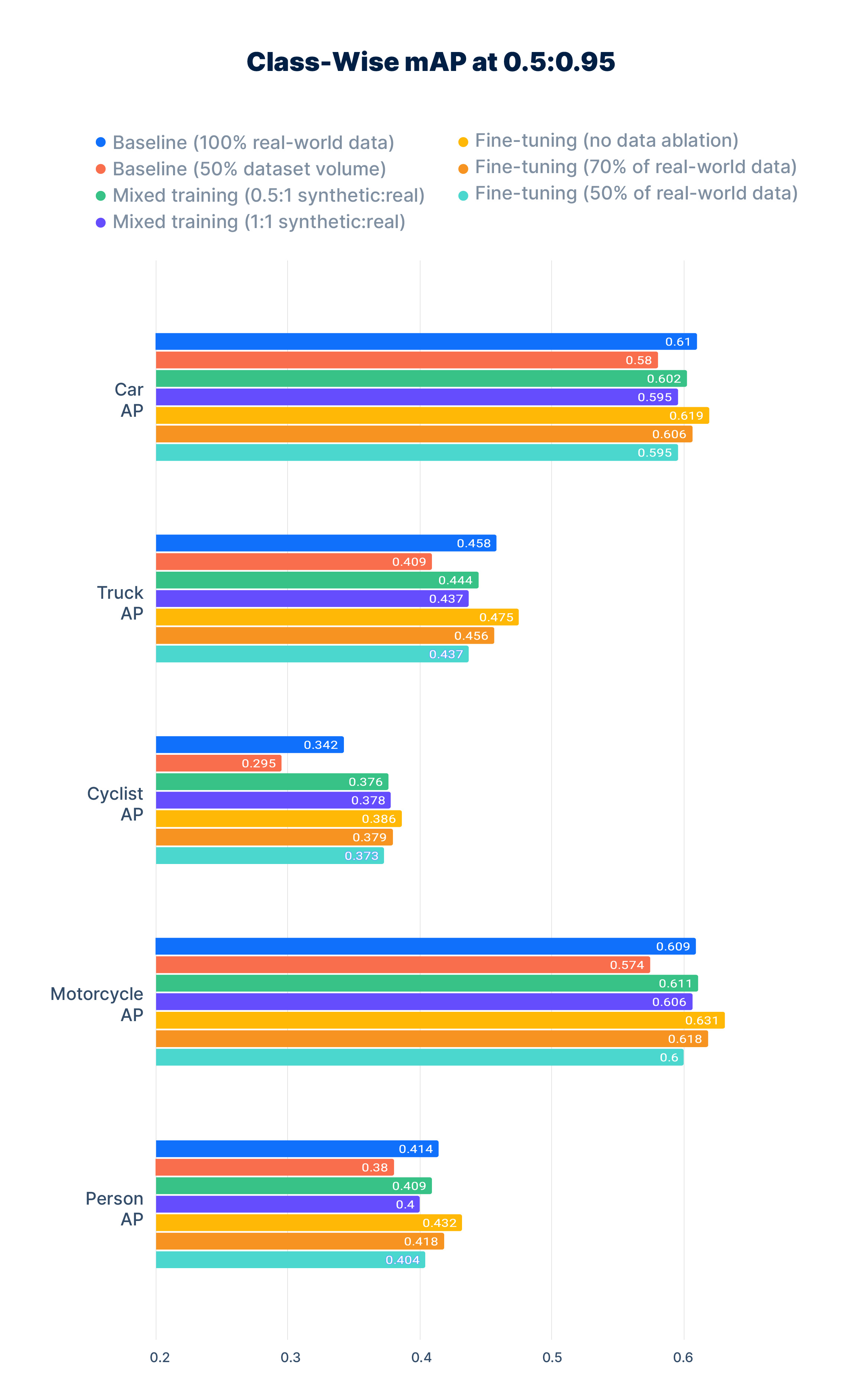 Figure 6: Class-wise mAP scores. Mixed training and fine-tuning experiments improve the mAP scores on cyclists compared to the baseline with 100% of the real-world data, while improvements are limited on other classes.
Pre-training a model on synthetic data and then fine-tuning it on 70% of the real-world data (fine-tuning with data ablation) leads to an improved performance, both on the cyclist class (Figure 6) and overall (Figure 7). 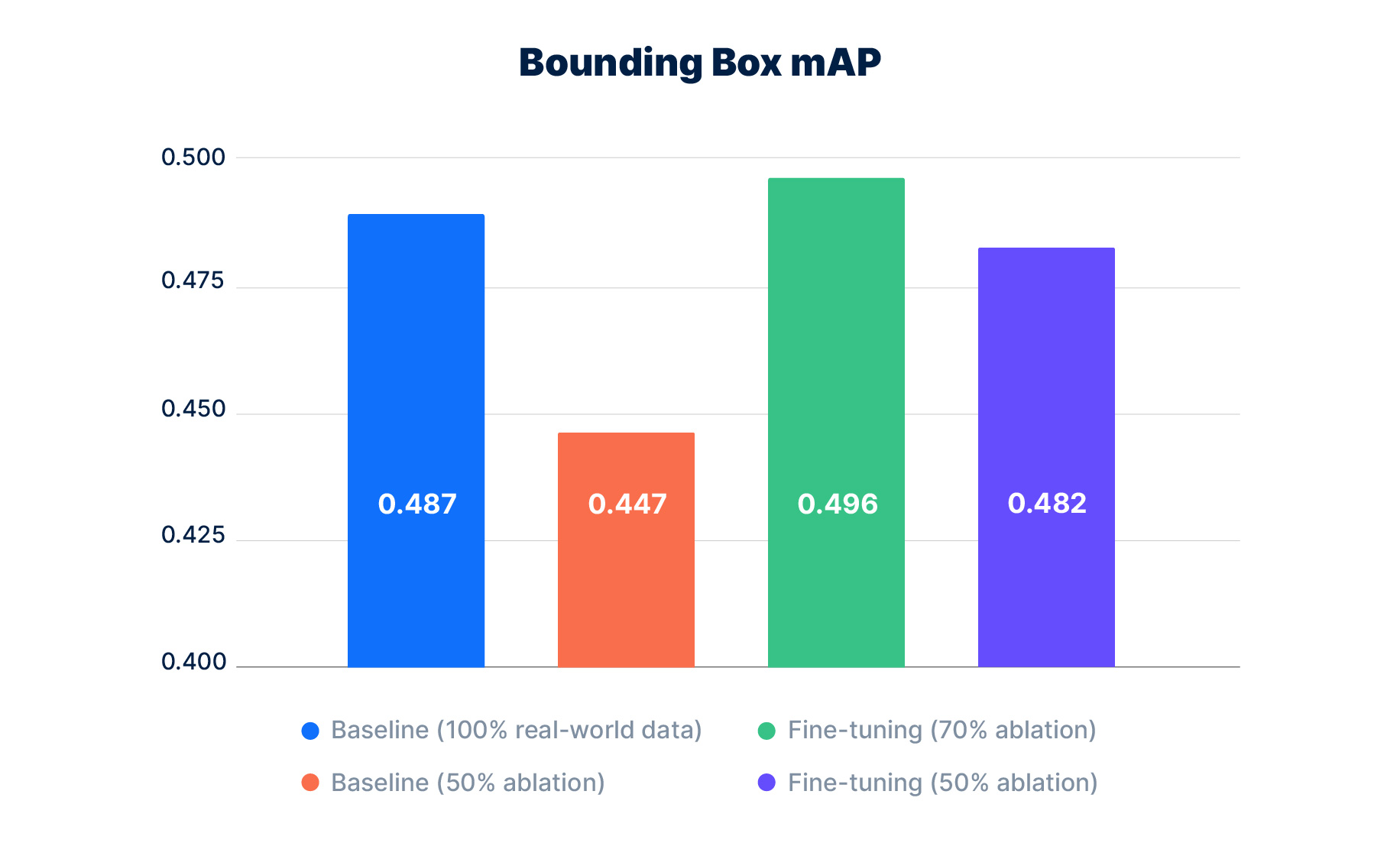 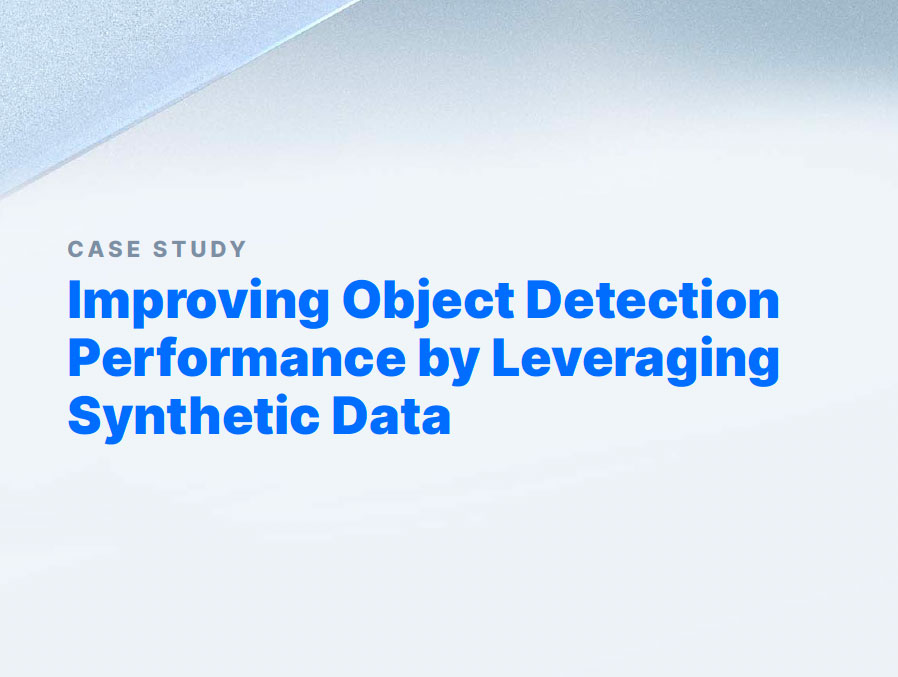 See all quantitative results in the case study
Thank you! Click to download the full-length case study.
Oops! Something went wrong while submitting the form. Please try again.

The case study suggests that synthetic data can help improve object detection performance in difficult cases. The following images show cases in which the baseline model fails to adequately detect a cyclist while the model pre-trained on synthetic data succeeds (Figures 8 a) - 8 c)).

Figure 8 a): The baseline model trained only on real-world data fails to detect a cyclist at a close distance from the ego vehicle (left). The model pre-trained on synthetic data successfully detects that cyclist (right).

Figure 8 b): The baseline model trained only on real-world data fails to detect a cyclist close to the ego vehicle (left). The model pre-trained on synthetic data successfully detects that cyclist (right).

Figure 8 c): The baseline model trained only on real-world data fails to detect a cyclist in the shade (left). The model pre-trained on synthetic data successfully detects that cyclist (right).

This case study shows an early indication that synthetic data is a useful supplementary tool to real-world datasets when training AV perception models on both nominal and edge cases. Even though situations such as fallen objects, pedestrians or live animals on a highway, and bad visibility due to dense fog are rare, AVs must be prepared to safely navigate them. Synthetic data can help address class imbalances by improving a perception model’s object detection performance on minority classes such as cyclists. Synthetic data also provides a fast, cost-effective, and ethical way to generate training datasets and target rare or difficult cases when real-world data is too infrequent or dangerous to collect.

Read the full case study
Thank you! Click to download the full-length case study.
Oops! Something went wrong while submitting the form. Please try again.
Contact our engineers to learn more about Applied’s synthetic datasets.
← Back to all postsSee next post →

Applied Intuition enables engineering and product development teams to safely develop, test, and deploy autonomous vehicles at scale.
Thank you!
Please check your email to confirm your subscription.
Oops! Something went wrong while submitting the form.